Well time sure is flying! With each year that passes, I find that my spare time is becoming less and less. Perhaps it’s the side-hustles and various other things I have going on right now which is just sucking every spare second out of the day?

Well, the good news is that work wise, Google has settled down in terms of algorithm updates and we’re finding ourselves for many of our clients, that rankings have re-stabilised and are back to record breaking levels! Unfortunately however, our success is slightly limited with Brexit on the horizon, putting many of our clients to cut back on their marketing spend for budgets 2019/2020 – which led to a few of our clients having to go down to a ‘support only’ type contract. Onwards and upwards though!

My income this month came to a total of ?9,350.00 (which is broken down by a mixture of salary and dividends). Of this figure, I’ve invested ?5,082, resulting in a savings rate of 54% for the month! I’m still very pleased with keeping above 50% savings rate for Q1 of 2019 – in-fact, my average savings rate has been 58%, so really I am dead chuffed with this achievement (considering this time last year I was saving sweet bugger all bar from basic pension etc!). For Q2 and the 2019 in general, I’m raising the bar to an average savings rate of 60%! (Eeek!) – I’m really going to push myself for this – there were a few stupid expenses that I had – including more bloody car expenses and garden based items (currently working on raised beds). Without this, I think I would’ve aced the 60%, but such is life! I’m also starting to fall in love with the garden and the raised beds project I’ve been working on for the last 1 and half months. The satisfaction of eating your own vegetables and the taste far outweighs the sweat and time spent on getting the garden where it needs to be.

The good news with the above, is that the graphs are moving up with the right direction (upwards! :D) – The bad news, is that one of my stocks that I have (Carnival Group) saw a pretty substantial dip and therefore, my return on my stocks and shares are down by about -?500. Of course, this isn’t a loss yet (as I won’t sell) but I feel its important to record this. However, my S&S ISA with Vanguard has shown a positive improvement, up by 10.00% (on the dot) for March 2019.

Ugh, expenses! It feels like the last month, everything has gone up in price in terms of food / drink / day to day expenses (most probably linked with inflation / Brexit etc etc). Even Council Tax has gone up and we’re close to paying ?250p/m now as a household! (Crumbs – will need to look into this – I’ve read a few things over on Moneysavingexpert who said many have managed to successfully reduce their council tax bills, but it sounds like there’s a risk to your home being in a cheaper band than it should!)

Anyway, in total, this month was a bit of a whopper and ‘bad’ expenses (one offs / insurance, cars yadada) reached ?3,655 for the month. I’m expecting April to be slightly calmer in terms of expenses as we enter into Q2 of 2019. I still prefer to get all of my expenses done for the year (like the yearly renewals of insurance etc in Q1 of each year – makes the rest of the year stats look fab! 😀

In total, profit for MB this month was a whole whopping ?58! Oh dear, not as good as the last few months, but I can’t complain! A profit is a profit at the end of the day. Cheltenham wasn’t particularly kind to me in March. A few of the other people in the Slack Channel I’m part of also recorded mixed results with some being over ?1,000 down, whilst others being up over ?6,000! All in all, it isn’t too bad and we continue to solider on into April. Speaking of which, so far in April (3rd as I’m writing this blog post), we’re ?180 up! Swings and roundabouts and all that!

So we’re now just over 1 month into the Amazon Affiliate store. Things have been on the up, both in terms of clicks on the website and Google Organic rankings. Here’s the list of the top 25 performing phrases for the website and their associated Google organic ranking; 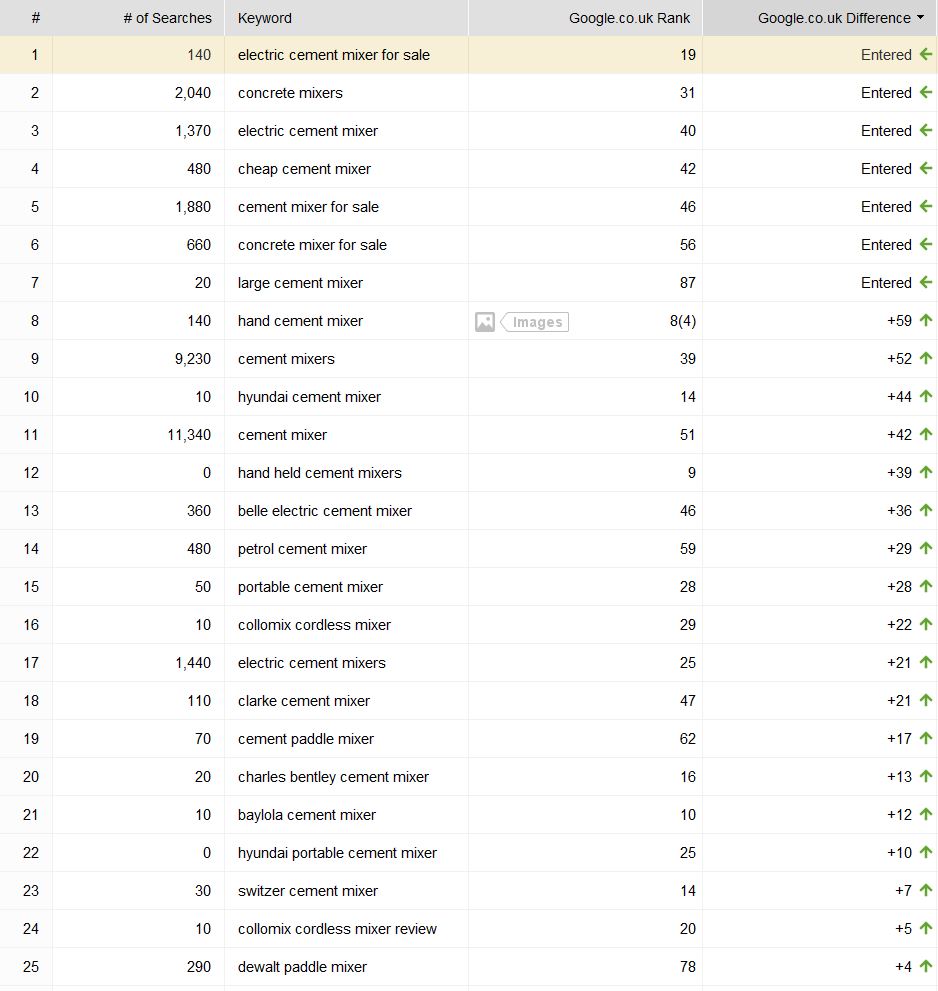 Wow weeee! This has been some pretty quick improvements I must say given that in an earlier blog post, the website was actually nowhere to be seen on Google! The fastest record ever I’ve been able to achieve for a business (one of our clients) is 2 months from a brand new website to ranking nationally for the main target phrase. This was for an artificial grass installer in the West Midlands. However, we may soon to have another record breaker in this regard! Some very juicy phrases starting to make headway, such as ‘Electric Cement Mixers’ which has 1,440 searches p/m on Google in the UK and is on page 3!

Given that we won’t be tracking every single search phrase the website ranks for, we have began to noticed a few clicks on some of the Amazon products already! See below dashboard from Amazon Affiliate area;

Of course, it is still early days but at-least for many of the days in March, we have see some clicks each day! We’ve still got a long old way to go, but the first target is to work towards 100 affiliate clicks in the month.

I’ll be working on some ‘SEO’ tips and ‘guides’ in April, easing into the basic technicalities of SEO and eventually building up / advancing over time.

For the time being, that’s all folks and here’s to a cracking April!

SEO: The Beginnings and Introduction